Last month, I wrote a post on Embracing your Role. Since then, I’ve had the opportunity to speak to a pair of local Fellowship of Christian Athletes huddle groups and a high school baseball team on the topic.

Roles are not just limited to those who come off the bench. Starters have a role to play but most don’t view it in that context. They are just viewed as starters. The best five, nine, or 11 players to begin the game on that specific day.

In researching for my baseball speech, I found the person who, arguably, could be considered as the best role player in baseball history – Pete Rose? Really? The maligned, all-time hits leader?  The shoe-in Hall of Famer, if not for his betting on baseball issues?

I was never a Rose fan growing up so this post is not an attempt to serve as his apologist. I did respect how hard he played the game and the passion he had for it. 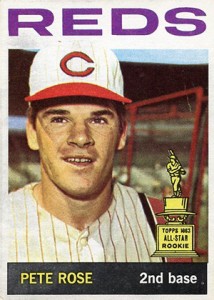 There are not many superstars, then or now, that would have done what Rose did. The former Macon Peaches standout entered the major leagues in 1963 and won Rookie of the Year honors at second base for Cincinnati. 10 years later, Rose captured his only National League MVP Award playing left field for the Reds.

The former Macon Peaches standout is the ONLY player in major league baseball history to play 500 or more games at five different positions (1B, 2B, 3B, LF, RF), and according to Baseball-Reference.com, a total 18,337 men have played in the Big Leagues. Rose also played nearly 100 games in centerfield.

A 17-time All-Star, in his 24-year career, Rose earned that honor seven times as an outfielder, five at first base, four at third base and one at second base.

It is clear that no role was to big or to small for Rose. He did what he was asked to do and what he had to do.

Rose embraced the opportunity to play any position, and that attitude helped him become one of the greatest players in Major League baseball history.